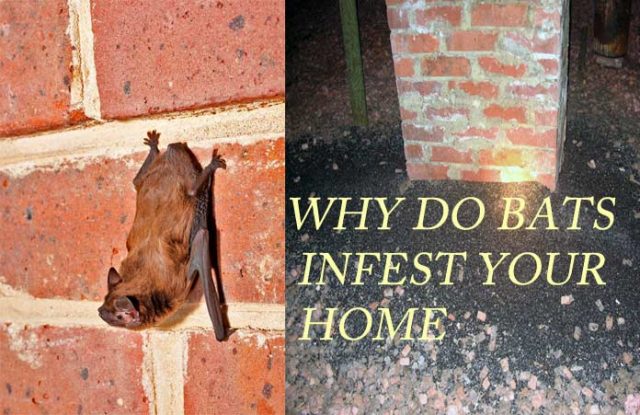 Bats are seemingly docile creatures that pose no real threat to humans as such. However, that doesn’t mean you start housing them in your home! A bat inside the house is not a pretty scenario for any house owner. For starters, bats are creepy. And secondly, these creatures are a nuisance to the household. The only good thing is that they eat other insects and pests lurking in your house, but that’s about it. If you see a bat in the house, here are some simple and effective remedies you should opt for to get rid of bats.

Some Basic Facts About Bats

Imagine a scenario when you’re home alone on a Friday night. You’re lounging on the sofa watching a movie when suddenly you hear screeching noises from your bedroom. You make your way upstairs and switch on the lights only to find a large furry winged creature hurtling past your head, flapping its wings ferociously. Enough to give you a heart attack eh? This is what pretty much a bat infestation feels like. Now, before we begin all bat control ways let us know all about these creatures

Where Do Bats Come From?

Most bats are tiny and furry, they do not need a large opening to get inside your house. They can enter through a hole that’s as narrow as ½ an inch in diameter! And you can usually find them in the dark, damp and warm corners of the house. So don’t be surprised the next time you find a bat in attic, roof, chimney, garage or wall- they can live anywhere as long as it’s cozy enough. Here are some of the probable entry points and hideouts of bats:

It is very difficult to actually spot a bat flying around the house. And chances are, you’ll probably scream your lungs out if you spotted one. However, there are several tell-tale signs that provide ample proof of their presence and infestation. Some signs of bat infestation are listed below

In most cases bats accidentally enter your house and are disoriented, scared and just want to escape. If you find a bat indoors during the daytime, chances are it lost its way and would be probably sluggish, slow and hence easy to trap. Bats can get inside your house because of a number of reasons. They may chase an insect or might even be getting chased by a cat. Sometimes, they simply come inside in search for some warmth. Regardless of how a bat got in, remember it just wants to get out. You can either keep bat away or trap it and relocate it to a safer place. Here are some ways you can trap the bat:

Driving the Bats Away

In case you are unable to trap them using the bat exclusion devices, you can always chase them away. Bats are probably a lot more scared than you are and just want to get the hell out of the house they’re stuck in. Here are some ways you can chase the bat stuck in your home

Best Home Remedies for Getting Rid Of Bats

Why spend a fortune hiring professional pest control services when you handle the bats yourself? Here are the top 10 natural home remedies for eradicating the bats that you can use:

Mothballs or naphthalene balls work wonders in driving bats away. Put some moth balls in a mesh bag and hang it high up in the ceiling or up the attic. The strong odor of naphthalene irritates the bats, compelling them to move to a different location. Be careful in handling the mothballs and avoid inhaling their fumes; the pesticide is harmful and might cause breathing problems.

Aerosol sprays are effective in driving away cats, dogs, and pests as well. The smell of aerosol suffocates the bats, compelling them to move to a different location. You need to be very careful while using aerosol spray, the poisonous gas can cause respiratory problems and allergies. Spray it in all the nesting areas from time to time and you’re set.

Do you know – How to Keep away Gophers and Ground Moles

Phenol or PCP has been used as a pesticide and disinfectant ever since the 1930s. Don on a pair of gloves, wear a mask and other protective gear that covers your eyes and nose. Spray some white phenol in and around the infested area. Once you have sprayed the chemical, open all the windows. This allows the bats to escape the suffocated area.

Aluminum foil makes a great deal of noise when it’s trodden upon. Also, the shiny material reflects a lot of light and hence a nuisance to bats who prefer quiet dark places. All you have to do is place large sheets of aluminum foiling paper on the probable nesting areas. It is perhaps one of the cheapest, simplest and most effective of solutions for chasing bats away.

Cinnamon is a common kitchen ingredient that is also known for its medicinal and insect repellent properties. The spice has a very strong smell and taste that pests like rodents and bats just cannot tolerate. Just mix some cinnamon powder in water and spray the solution in all the places where you think bats are likely to build their nests.

Mirrors are great if you want to drive the bats out in a more humane way, i.e. without physically harming them. In this method, you use light and mirror reflection to scare bats away. You might have to invest a bit of money in getting all the lighting equipment. Light up the dark, dingy corners of the house when the bats are sleeping. Also, ensure that you are not very near them when they fly about, trying to escape.

Mylar balls or foil balloons are a fun, creative way to get rid of bats. The foil balls work like aluminum and create a lot of noise when they clink. Fill 5-6 Mylar balls with Helium, this way they float towards the ceiling and stay there. Leave them in the nesting areas for a couple of days to drive the bats away.

Eucalyptus, known for its strong fragrance, is considered to be a potent natural insect repellent. The tree’s leaves’ oil is especially effective in driving out bats from the house. All you have to do is mix a few drops of eucalyptus oil in water and spray the solution all over the nesting areas. You can also buy some eucalyptus gel and spread it generously in the probable roosting spots. Repeat the process for a couple of days and you’ll never ever see bats near the areas anytime soon.

Bats prefer a stable, dark and damp place to roost and set up their nests. If you can disturb them in any way while they are roosting, chances are they’ll leave. Bat love quiet places where there is no external disturbance (this is why they’re usually found underground). Installing a fan or an air cooler near their nests is a smart way to drive the bats away. A sudden drop in the temperature creates enough disturbances for the bats to get out and look for more suitable environments.

Bats are sluggish, sleepy and extremely disoriented during the day. It is in the dark when they actively move about. Lighting the probable roosting spots is also a simple yet effective way to prevent bats from settling inside your house. The light disturbs the balance in their body temperature and also affects the moisture content of the air. Keep the rooms and surrounding areas of the house well-lit and airy. Open all the windows and doors; this encourages them to move outdoors.

Before we wind up, here are some more crucial information bites you’d want to know more about.

Yes, bats can bite. However, they are not the blood-sucking monsters that most horror movies portray them to be. Also, bats don’t tangle up in your hair and are not visually impaired as suggested by some. Their sonar senses are sharper and more effective in helping them move around and hunt.  Also, bats don’t have any supernatural powers that allow them to transform into monsters every full moon (or was it werewolves?) Eh, you get the point right? Bats are pests, the only threat they pose is that they can disrupt your household. And can attack if provoked. Their bites, though not fatal, should be treated immediately.

Why Do Bats Infest Your Home?

Bats do not harm humans, nor do they try to attack them. They’re just looking for a cold, dingy place to rest for a while. In the colder months, bats seek shelter in the warmth of the attics and other corners of the house. An open window or a crack in the walls is all they need to gain entrance to your property. Moreover, bats try to steer clear of humans. If not for the noise and the droppings, bats are actually quite nice to have around as they prey on all the other insects lurking about. Unfortunately, bats create a mess where they live, their droppings contain microbes that cause breathing problems and nausea in humans.

Dealing with a Large Bat Colony

There are two types of bat infestation cases. One where a solitary bat flies astray and accidentally ends up inside your apartment. And second where a large colony of bats purposefully chooses your abode for nesting. It is best that you call up professionals to deal with a large colony of bats. Do not try to provoke them or catch them yourself. Bats, though harmless, can bite. And their sharp, tiny teeth leave little markings or punctures on the skin that might go unnoticed at a glance. You might not be even aware of being bitten by a bat! If anyone in your house is bitten by a bat, do not release the bat outside. Instead, inform the pest control team immediately and get the animal tested for rabies.

Dealing with a bat infestation is no easy job. You have to be mighty careful in order to avoid getting bit. Here are some precautionary measures that you must adopt when trying to remove the bat from your house:

Cleaning Up After the Infestation

Cleaning up bat droppings is the most cumbersome part of the whole evacuation process. Now that the bats are outside in their natural habitat, the next step is to clear up the mess they’ve made during their stay inside. From disposing of off their droppings to scrubbing the doors, floors, and walls – it is a tiring process indeed. Also, install mesh in the window sills, fill up the holes in the walls and clean up the attic while you’re at it. You don’t want bats to come back now, do you?

You may know also –

How To Stop Sugar Cravings Naturally And Kick The Sugar Addiction